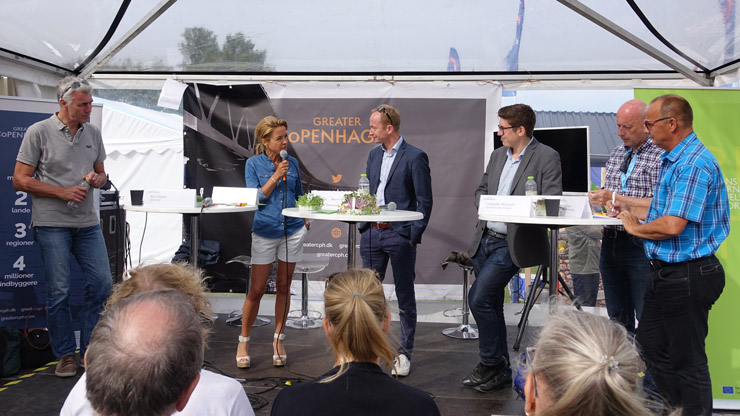 GREAT arranged a debate at Folkemødet, the Danish political week at the island of Bornholm on the 15th of June 2017. The seminar titled “Sustainable heavy transports to secure greater growth!” gathered both industry and politics. This is a short summary of the seminar.

We need to switch to fossil free fuels that does not have negative effects on the environment, the climate or people’s health. All panellists were in agreement about the importance of that fact, but when it came to the way to reach this needed decarbonisation, there was disagreements among the panellists.

According to Kim Rene Busch, Forhandlingssekretær in 3F Transport, the cost for transporting goods is not too expensive, on the contrary – it’s far too cheap! Michael Svane, Branchedirektør, Dansk Industri underlines that for businesses there is money in making use of sustainable transport options.

“Sustainable transport is an important issue both from a supply security perspective, certainly from a regional political angle but also from a public health perspective” claims Christoffer Reinhardt, Det konservative Folkeparti. But is it really on the political agenda? Tore Harritshøj, CEO, E.ON Danmark, believes that there is no incentive for political action at present and that the issue does not have enough political attention.

“Removing charges on electricity is one important measure and we see now that Region Huvudstaden have taken the decision to invest in electric buses. This is a really positive sign and a proactive positive example” says Lærke Flader, Elbilsalliansen.

The panellists had a large number of suggestions for action: road pricing, sustainability requirements in procurement processes, better logistics planning and using rewards instead of penalties to enhance behavioural change. Unfortunately the panel lacked of consensus on which methods would be most effective. Green transition is important for all panellists but at the same time, competition must be secured and technology neutrality is important in combination with a cross-border perspective for the infrastructure for alternative fuels.

“We must have a greater interest from the national level” repeated Tore Harritshøj from E.ON Denmark as a conclusion