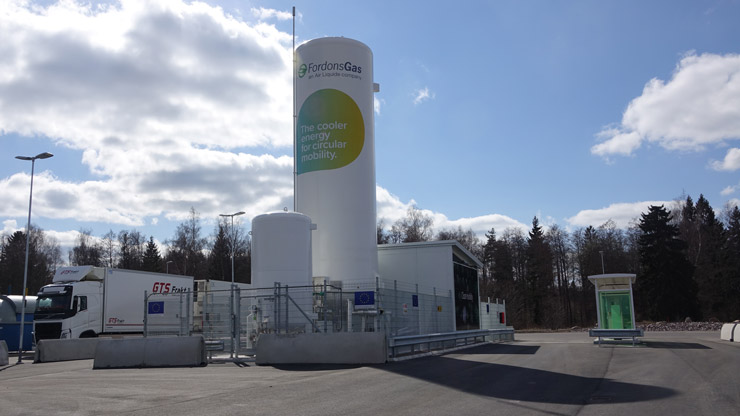 On 11 April FordonsGas’ new filling station for liquefied gas (LNG / LBG) was inaugurated in Mjölby, Sweden – the first in Sweden funded by the EU and FordonsGas’ fifth for LNG. The stations contribute to reduced emissions and enable sustainable heavy transport over long distances. Something that is particularly important since the options for providing decarbonised heavy transport are few. This station is one of the important initiatives that provides the opportunity to meet Sweden’s target of 70% reduction in greenhouse gas emissions from domestic transport by 2030.

”Today’s opening of this LNG station is a significant contribution towards building a low emission European Transport Network, along the Scandinavian-Mediterranean Corridor. The GREAT project, also deploying a national Electric charging network, is in this regards, an important enabler in the fight against Climate Change, and I am glad that the European Union can support it financially thought the Connecting Europe Facility” said Richard Ferrer, Senior Project Manager – Head of Innovation Team at the EU’s Innovation and Networks Executive Agency (INEA)

With the establishment in Mjölby, FordonsGas becomes Sweden’s leading actor in LNG/LBG for heavy transport. FordonsGas also plans to cover southern and central Sweden with an easily accessible infrastructure for LNG/LBG. In the future, another twenty new gas stations for liquid gas are planned.

“Mjölby is well situated along the transport routes of our customers and it is an important hub in one of Sweden’s largest goods and traffic flows. This station is important from a local and regional perspective, but it is also part of the development of fossil-free transport that is now taking place throughout Europe” said Sofia J Nordström, Sales & Marketing manager HDV at FordonsGas.

On site at the grand opening there were heavy LNG lorries from three large vehicle manufacturers – Volvo, Scania and Iveco. All three see the investment in filling stations as very positive for the development of LNG/LBG for heavy road transport in Sweden.

“The gas station for liquid biogas in Mjölby is an important addition to the network of renewable fuels required for the transport sector to reach the climate goals. Different renewable fuels complement each other. Liquid biogas is an important fossil-free alternative in long-haul transport” said Henrik Dahlsson, Sustainability Manager at Scania Sweden, and continued:

“Sweden is a pioneer in the biogas field. We can show the way for the rest of Europe that is now investing heavily in LNG.”

The fuelling station is a positive addition, considers both Region Östergötland and Mjölby municipality. Region Östergötland has for a long time been working to increase the use of biogas and this station strengthens the possibilities for local hauliers to shift. The location in Mjölby also means that a high traffic area for heavy vehicles now has opportunities for sustainable refueling. Mjölby municipality also plans extended truck parking adjacent to the station.